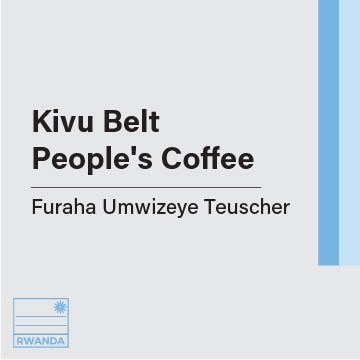 About Kivu (with thanks to Melbourne Coffee Merchants):

We are very excited to share this coffee with you from the breathtaking and promising Nyamasheke region in Lake Kivu, which is located in the Western Province of Rwanda. The Kivu area is hotter than the Northern and Southern Provinces, and has the perfect conditions for coffee cultivation, with some of the highest elevations in the country, nutrient-rich volcanic soil and a unique micro-climate created by the humid equatorial mist that forms from Lake Kivu. It is known for producing unique coffees that are complex and delicate.

This coffee was processed at a washing station called Murundo that is privately owned by Furaha Umwizeye. Umwizeye, was born in Rwanda, raised in the Democratic Republic of the Congo, and educated in Switzerland, where she completed a Master’s degree in economics. Like many Rwandans who were abroad during the horrific genocide in 1994, Umwizeye was motivated to return to Rwanda and contribute in a positive way to the society and economy. With skills in international finance and trade, she was well equipped and identified coffee as an industry that could positively contribute to Rwanda’s ongoing reconstruction.

“From the beginning, our goal was to produce a coffee of high quality for the specialty market.” Umwizeye explains, “To ensure the best quality, one has to have control of the production process. Traditionally in Rwanda, coffee washing stations and coffee farms are not vertically integrated. The ownership is separated. Coffee washing stations rely on multiple small coffee farmers for their supply of cherries [who typically only own 100–300 coffee trees]. We identified that to ensure the same high quality year after year, one has to be able to control how the coffee trees are being produced and harvested.”

In 2011, Umwizeye established Kivu Belt, a coffee farming, milling and export operation in Western Rwanda on the shores of the the picturesque Lake Kivu. Today Kivu Belt have planted over 90,000 coffee trees across three farms (Jarama, Kamajumba —which is actually located on an island on Lake Kivu — and Nyaruzina). They employ 18 permanent workers and 130 seasonal workers.

This particular lot of coffee comes from the small producers who deliver to the Murundo Coffee Washing Station. They have small plots of land in hilly terrain (often only accessible by foot) with an average of only 300 coffee trees each. In addition to coffee, they use their land to cultivate crops like maize and beans to feed themselves and their families. Most of their income from the sale of coffee is used to send their children to school, pay for medical care, and for investment in livestock — such as purchasing a cow for milk, which is then used at home and for sale locally.

Umwizeye regards these small producers as heroes — they work incredibly hard in tough conditions to deliver coffee to their washing station, and her mission is to reward their efforts and help improve their livelihood. She ensures they pay the highest possible price for the cherry and that the mill processes the coffee with the utmost care and attention.

Umwizeye resides in New York with her Swiss husband, returning to Rwanda frequently during the harvest. Throughout the year she has an awesome team of people that support her, including Gaspar Nsengimana, who is the Chief Agronomist and oversees the entire Kivu Belt project, and Claudeen Kantengwa, who is the managing director of the company. Vicky Sempotore, who has worked in coffee since 2005, is the manager of the Murundo washing station and oversees quality control.

We first visited Umwizeye’s farms in 2015, with our longtime friend and producing partner, Sam Muhirwa of Buf Coffee. We have been working with Muhirwa and his mother, Epiphanie, since 2009. Up until 2014, Buf Coffee’s activities have been concentrated in the Southern Province of Rwanda, where Muhirwa’s family business is based. Over the last couple of years, Muhirwa has been fostering new relationships with producers, providing them with advice and helping them to market their coffees.