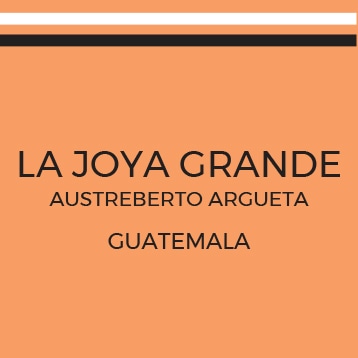 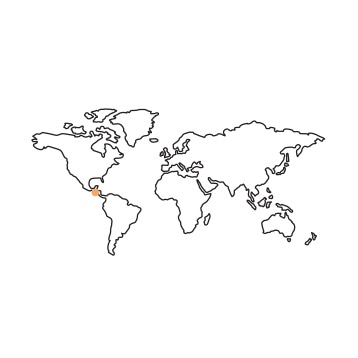 Treacle sweetness. Juicy and clean with notes of mandarine, peach and melon.

About La Joya Grande (with thanks to Melbourne Coffee Merchants)

Finca Joya Grande lies high in the mountains of Guatemala’s Huehuetenango Department. The region’s steep slopes and cool climate are ideal for specialty coffee production. Unlike Antigua, Huehuetenango is not volcanic, so the coffee’s profile tends to be quite distinct. Thanks to the dry, hot winds that blow into the mountains from Mexico’s Tehuantepec plain, the region is protected from frost, allowing Highland Huehue to be cultivated up to 2,000 metres above sea level. These high altitudes and relatively predictable climate make for exceptional specialty coffee.

The current owner of Finca Joya Grande is Austreberto Morel Hidalgo Argueta, who is the third generation to farm this privileged land. While he works to preserve the legacy of his Grandfather, the first man to farm coffee here, he has added his own improvements as well. It is telling of the region’s remoteness that the road that leads to the farm was built by Austreberto himself in 1984. Prior to that, all coffee had to be transported in and out of the farm on horseback by narrow paths.

The farm is comprised of 52 hectares, 35 of which are planted under Caturra, Bourbon and Catuai varietals, all of which is shade-grown. The rest of the farm’s land is maintained as forest preserve. Perhaps the deep emerald green of the hillsides gives the farm it’s name, which means ‘large jewel’ in Spanish.

One of Don Astreberto’s sons is an Agronomist, and he has overseen all aspects of the farm’s activities for the past 15 years. Together, he and his father have personally dedicated themselves to the supervision and control of all farm activities, from pruning to fertilisation to maintaining healthy and pest free trees. On average, the trees on the farm at 20 years old. The pruning system they have adopted is selective, whereby each plant receives the exact treatment it needs from year to year, rather than by block. Caturra, Bourbon and Catuai varieties were chosen as they perform very well in the local climate, and every effort is made to ensure that renovation takes place using the very same varieties of coffee. The stringent cultivation practices make sure that the trees are given the very best opportunity to produce optimum coffee.

The father and son team don’t let that work fall flat! An equal amount of work goes into making sure that processing gives the opportunity for each lot of coffees to develop the full range of characteristics that it can. The harvest begins in early January and ends in late March. Coffees is selectively hand harvested, with pickers choosing only the ripest cherries, and is then machine pulped. After pulping, the coffee is fermented in fermentation tanks for around 12 hours. It is then washed using a demucilager and delivered to dry on the farm’s patios for 8 to 10 days. The farm provides employment for around 15 people year round and this increases to 60 during the peak harvest.

We selected this specific lot (comprising Caturra and Bourbon varieties) earlier this year on our annual trip to Guatemala for it’s delicious cup profile. It is this first time we have bought from Finca La Joya Grande and we hope to build on this relationship year on year.