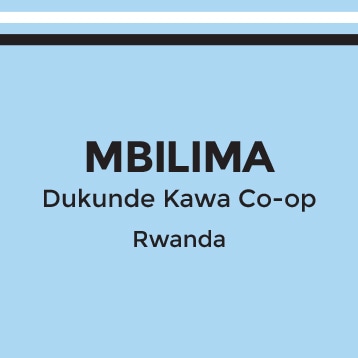 About Mbilima (with thanks to Melbourne Coffee Merchants)

This beautiful coffee comes from the Mbilima washing station which is owned by the Dukundekawa Cooperative. The washing station is located in the rugged North-West in the town of Musasa, at around 2020 metres above sea level, making it one of Rwanda’s highest washing stations. Close to the famous Virunga (Volcanoes) National Park, this part of the world has a mineral rich soil and a lush environment that is well suited to specialty coffee.

By Rwandan standards, the Mbilima washing station is quite small, representing only 579 local producers in the area. 4 permanent staff and 92 seasonal workers are employed by the washing station – of which 95% are women. Quality control and day to day operations are overseen by John Bosco Habimana, who has been the Wet Mill Manager by 2012.

The Dukunde Kawa Cooperative was established in 2000. Three years later, it built its first washing station, Ruli, with the help of a development loan from the Rwandan government and the support of the USAID-funded PEARL program. This transformational program was aimed at switching the focus of the Rwandan coffee sector from an historic emphasis on quantity to one of quality – and, in doing so, opened Rwanda up to the far higher-earning specialty coffee market. The program and its successor, SPREAD, have been invaluable in helping Rwanda’s small-scale coffee farmers rebuild their production in the wake of the devastating 1994 genocide and the 1990s world coffee crash.

All of Dukunde Kawa’s members are small-scale producers, who typically own less than a quarter of a hectare of land each. They use this land to cultivate an average of 250-300 coffee trees, along with other subsistence food crops such as maize and beans. By selling their coffee to Dukunde Kawa, these farmers are able to process their cherries centrally and combine their harvests into quantities large enough for export.  Dukunde Kawa provides its members with agronomy training, access to fertilisers and organic pesticides, and a host of other resources to support farms and families.

Before the proliferation of cooperatives and washing stations in Rwanda, small farmers sold semi-processed cherries on to a middleman, and the market was dominated by a single exporter. This commodity-focused system – coupled with declining world prices in the 1990s – brought severe hardship to farmers, some of who abandoned coffee entirely.

In addition to the great work that the cooperative does with quality improvement and assurance, they also have various social programs that greatly contribute to the livelihoods of their members. School fees and medical insurance are provided along with training in quality and productivity in cultivation of coffee. Class rooms have recently been built at the Ruli washing station, along with a model farm that is used to demonstrate best practice in coffee farming.

Recently, for example, the cooperative has invested in three new mechanical cherry sorters (which divide the ripe from under ripe cherries prior to pulping the coffee) – one for each of its washing stations. These machines are expensive and difficult to get to the rural washing station so it’s a big deal and an excellent investment made by the cooperative. This kind of decision is a great example of how the Dukunde Kawa cooperative thinks about and appreciates the long term investment that is essential to produce high quality coffee.

In addition, at their Ruli washing station, they have also built a milk-refrigeration facility, to help generate off-season income for farmers and their families. Farmers are able to supplement their income through the sales of milk, and the community benefits as they are able to access fresh milk and cheese which helps improve their diets. In addition, the cows produce very useful fertiliser for the coffee! The cooperative are now also raising funds for a pasteurisation machine, which will enable farmers to sell their milk in Kigali for higher prices.

Dukunde Kawa has also completed construction on its very own dry mill and warehouse, which is very rare for rural Rwanda – this sort of infrastructure is usually found only in the urban centre of Kigali. This (excitingly) gives them more control over the processing, and means even more micro lot seperation will be possible as well as more experimental lots in coming years. Dukunde Kawa have now began constructing a cupping room, where farmers will be trained to taste and critically evaluate their coffees.

‘Dukunde Kawa’ means ‘love coffee’ in Kinyarwanda (Rwanda’s official language), in reference to the power of coffee to improve the lives of those in rural communities.

The cooperative works extremely hard to improve the lives of its members and their families, and to produce the best quality coffee possible. According to the cooperative’s president, Minani, Dukunde Kawa’s goal is to be the very best cooperative in Rwanda. We think they’re well on their way to achieving this goal!

The team at Dukunde Kawa take a huge amount of care in processing the coffee. All members of the Dukunde Kawa Cooperative are trained to only select the very ripest coffee cherries from their trees. During the harvest, cherries are delivered daily to the washing station via foot, bicycle or driven by truck from a local pick up point.

On delivery the cherries are inspected and sorted to ensure only the very ripest cherries are processed. They are then sorted by weight (and any floaters removed) and pulped on the same day – almost always in the evening – using a mechanical pulper that divides the beans into three grades by weight (the heaviest – 0r A1 usually being the best). After pulping the coffee is fermented overnight for around 12 -18 hours and then graded again using floatation channels that sort the coffee by weight. The beans are then soaked for a further 24 hours, before being moved to raised screens for ‘wet-sorting’ by hand.

As with most washing stations in Rwanda, women do the majority of hand sorting. This takes place in two stages – on the covered pre-drying tables and on the drying tables. Washed beans are moved from the wet fermentation tanks onto the pre-drying tables, where they are intensively sorted under shade for around six hours. The idea is that greens (unripes) are still visible when the beans are damp, while the roofs over the tables protect the beans from the direct sunlight. Next, the beans are moved onto the washing station’s extensive raised drying tables (‘African Beds’) for around two weeks, where they are sorted again for defects, turned regularly and protected from rain and the midday sun by covers, ensuring both even drying and the removal of any damaged or defective beans.. During this period the coffee is also turned several times a day by hand to ensure the coffee dries evenly and consistently.

After reaching 11% humidity, the coffee is then stored in parchment in Mblima’s purpose-built warehouse prior to final dry-milling and hand sorting at the Cooperatives brand new dry mill at the Ruli washing station.

All lots processed by Dukunde Kawa are separated by day and cupped individually. Upon delivery as cherry, the coffee receives a paper ‘ticket’ that follows the lot through all its processing. This ticket bears the date of harvest and the grade (A1, A2 etc) of the coffee – for instance, if a coffee lot is called ‘Lot 1- 06/04 – A1’, this means it was the first lot processed on April 4 and the grade is A1. This simple but effective practice is a crucial tool in controlling quality and ensuring the traceability of lots