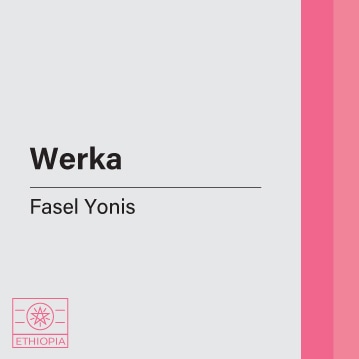 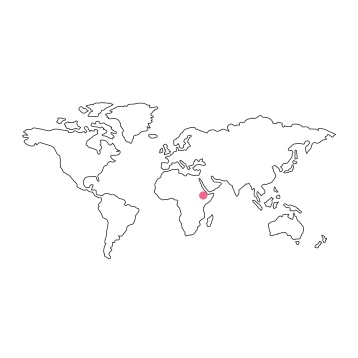 Juicy and bright. Notes of Gardenia and Bergamot.
Honey-like sweetness.

ABOUT WERKA (with thanks to Melbourne Coffee Merchants)

Werka (pronounced “wer-kah”) is a privately-owned washing station located in the Nensebo ‘woreda’ (administrative district) in the West Arsi locality in Ethiopia’s renowned coffee region, Sidamo, in the south-east of the country. It is named after the ‘kebele’ (local village) of Werka. The washing station is one of ten owned and managed by Testi Coffee, a family-owned company founded by Mr Faysel A. Yonis. Werka produces both washed and natural coffees.

Coffee is delivered daily to Werka by around 750 small local coffee growers. The majority of these families farm organically on tiny plots of land, which average just 2–5 hectares in size. Coffee is their main cash crop and grows alongside food crops of corn, grain and bananas, under the shade of native Birbira, Wanza, and Acacia trees. The average elevation of the farms in this region is very high – around 1,900–2,050m above sea level – and this, combined region’s cool temperatures, is ideal for the slow ripening of coffee cherries, leading to denser beans and a sweeter, more complex cup profile.

Sidamo is a wide geographical classification which encompasses much of central-south Ethiopia and includes renowned coffee producing localities such as Yirgacheffe, Kochere, West Arsi, Bensa and Guji. Sidamo is located in Ethiopia’s South East Coffee Zone, extending across the states of Southern Oromia and the Southern Nations, Nationalities, and People’s Region (SNNPR), one of nine ethnically based regional states of Ethiopia. The Sidamo zone is named for the Sidama people; a tribe with a long and proud history of coffee production. After a 2019 Referendum, the zone is currently awaiting separation from the SNNPR and transformation into an autonomous Sidamo Region.

Coffee has been cultivated in the Sidamo Zone for centuries and is an important source of income for rural households, who grow it as the primary cash crop. Family plots are small and intensively farmed with intercropped coffee, food crops like pulses, grain and yams, and other cash crops like khat (similar to tobacco) and Ethiopian banana. Most farms are planted amongst or alongside indigenous forest trees, which provide a thick canopy of shade for the coffee trees. Historically, farmers in this area will use organic farming practices (although it is unlikely to be certified) as there is not ready access to artificial fertilisers or pesticides.

This coffee is a mix of varieties that we refer to as “heirloom varieties”. This is a term that is all-encompassing and used by many actors in the coffee industry to generally categorise Ethiopian coffee varieties that are from native forest origins. Whilst this describes many of the varieties found in Ethiopia, it is also a bit simplistic and does not recognise varieties that have been specifically developed and widely distributed by the Jimma Agricultural Research Centre (JARC).

In the Sidamo growing region, there are four “Specialty Group varieties” that have been released by JARC. These are called Angafa, Faye, Koti and Odicha. There are also native or “landrace” varieties in the region that were originally selected from the forest and have been propagated in the Sidamo region for decades. There are five popular ones that all have been named after indigenous trees in the area—they are Bedessa, Kudhumi, Mique, Sawe and Walichu. There is little documentation on the history of these varieties, and it is hard to know if they represent single varieties or a wider group of varieties, however, it is widely accepted that they play a major role in the quality of the coffee from this region, with a distinctive floral and citric cup profile.

This coffee has been processed using the washed method, using clean water from the nearby river. It is classified as Grade 1, the highest quality classification for Ethiopian coffees, indicating a great deal of effort has been put into the selection and grading during processing.

Each day, carefully hand-picked coffee cherries are delivered to the West Arsi washing station and are meticulously sorted by hand and in a floatation tank prior to processing to remove unripe, overripe, or damaged fruit, in order to enhance the quality and sweetness of the cup.

The word “testi” means happiness in the Harrari language, which is fitting as their coffees make us very happy! We love Werka for its delicate florals, tea-like structure and sparkling acidity.